Al and Chrissy Toledo were both born and raised in New York City.  Al, born of Cuban parents, was headed for a promising career as a professional baseball player when the Lord revealed Himself to him at the age of seventeen on a baseball field. After being drafted by a major league team and playing in college, Al began attending the Brooklyn Tabernacle, a short distance from the apartment where he grew up in. He sensed that God was calling him into ministry and left Brooklyn to attend Bible School in Rhode Island. While at Bible School, Al fell in love with Chrissy Cymbala, his longtime friend, who was serving on staff at the time leading the music ministry. They were married in 1992 and began serving in full time ministry together.

Chrissy, a pastor’s daughter, accepted the Lord at a very young age. She was blessed to grow up in that same inner-city church, the Brooklyn Tabernacle with people from all walks of life. Chrissy grew up loving her world. As a pre-teen, however, something began to happen in her heart, unbeknownst to her family and friends, that would set her down a road of turning her back on everyone she loved. Chrissy shares about the miracle that took place in her life in her book Girl In The Song.

Al and Chrissy have been happily married for nearly 30 years and have three adult children, and five grandchildren. In 2001, while on a trip to Chicago for a time of rest, God placed a seed of love in their hearts for the people of the city and in 2002 they took a great step of faith and planted the Chicago Tabernacle.

The Toledo’s feel privileged to have a front row seat to so many testimonies of God’s grace and power. It has been the gift that continues to energize their faith to live their lives in service to Him.

Pastor Edgar Rivas was born and raised on the west side of Chicago. After being involved in gangs as a teenager, he decided to leave Chicago and serve his country in the US Marine Corps. After the incidents of 9/11, he served his country again by joining the Department of Homeland Security, serving for 12 years. In 2009 Edgar rededicated his heart to Christ and began a journey that led him to give up his career of federal service and answer the call of God to full-time ministry.

Christie also grew up in Chicago and committed her life to the Lord at the age of eight during a weeknight Bible study. She attended North Park University in Chicago and graduated with a Bachelors Degree in Early Childhood Education. She has served the children of our church since 2010 and has a deep desire for children to fall in love with the house of God.

Pastor Edgar and Christie met at Chicago Tabernacle in 2012 and were married in 2013. They now have three young girls–Eliana, and twins, Ally and Gabby.

Pastor Tim was born and raised in Barbados where he was led to the Lord by his Chemistry teacher at 18 years old. Just after, he moved to the States to attend college, studying Geology at Brooklyn College, then went on to receive his Master of Social Work from New York University. He has since served as an administrator and pastor at churches in New York, namely the Brooklyn Tabernacle, Tennessee, Nigeria, and Barbados for over 22 years. Pastor Tim and his wife Esther met at the Brooklyn Tabernacle and were married in 1996.

Born and raised in Nigeria, Pastor Tim’s wife, Esther, also moved to the United States to attend college, receiving her BS in International Business from Quinnipiac University, an LLB from the University of Buckingham, and an MA in African Studies from Yale University. It was during her time in Law school that one of Esther’s friends shared the Gospel with her, leading her to surrender her life to Christ. Esther has served in various ministries including the Brooklyn Tabernacle Prayer Band, launching Chi Alpha at the University of Memphis, and currently serves as one of the Continental Coordinators of Wailing Women Worldwide for the USA and Canada.

Together, Pastor Tim and Esther were blessed with their son Elim, and their mission is to walk humbly before God daily as they extend His love and mercy in service to others. Their desire is that others experience hope and joy in Him, to the honor and glory of His Name.

Pastor David is the son of a military chaplain, and grew up all over the world. Similarly, Susie was raised in Bosnia in a missionary family.

Pastor David was saved as a young boy, and felt a call to ministry in high school. While attending Moody Bible Institute, his brother invited him to the Chicago Tabernacle, where he began to serve and continue to grow in leadership. During this season of his life, Pastor David encountered God’s presence in a powerful way. Pastor David has a desire for all people to encounter God in this way, so they can see the supernatural power of God in their everyday lives. Susie also felt a call to ministry at a young age. She has a passion to see every child in Chicago be reached with the gospel and to see them become godly, powerful leaders in God’s Kingdom. Pastor David and Susie have three little ones of their own; Owen, Eden and Elliot. Both David and Susie have a heart to evangelize and their prayer is to see revival come to Chicago.

Pastor Jose Figueroa grew up in Chicago. After following a self-destructive path in his early 20’s, he dedicated his life to Christ in 1999. Pastor Jose’s mission is to inspire others to love Jesus and live out the Gospel. Pastor Jose holds a Bachelor’s degree from Indiana Institute of Technology and a Master’s degree from Moody Theological Seminary. Darcy committed her life to Christ when she was a young girl. She was drawn towards a life of cross-cultural Christian service since her early teens and pursued training towards that end by graduating from Baptist Bible College of Clarks Summit, Pennsylvania. Darcy enjoys utilizing her professional and ministry training to serve women and families at CT.

Pastor Jose and Darcy met at the Chicago Tabernacle when the church first opened its doors in 2002, and they were married at CT in 2004. After completing his seminary studies, Pastor Jose and Darcy moved to Santo Domingo, Dominican Republic, where Pastor Jose co-pastored a church for the urban poor. They returned to Chicago in 2013, and Pastor Jose joined CT’s pastoral team in 2015. Along with serving the marriages of the church, Pastor Jose is passionate about outreach, community engagement, and local and global missions. He and Darcy have been blessed with two children, Isabel and Gabriel.

Pastor Josh grew up in the Midwest in the home of a pastor.  After receiving a degree in Construction Management and Business from Ball State University, he moved to Chicago in 2007 where he began a career in construction project management and started attending Chicago Tabernacle in early 2008.  During this time, his walk with the Lord deepened and he began to sense a call to ministry; he joined the Chicago Tabernacle staff in 2011.

Susie came to Chicago in 2002 when her parents, Pastor Al and Chrissy Toledo, founded the Chicago Tabernacle.  Susie felt a call to the ministry as a teenager and began serving at the church as an intern in 2008. She joined staff in 2009, where she has been a part of the Creative Team since.

Pastor Josh and Susie have a heart to encourage, serve others, and equip them to fulfill their God-given mission.  They were married in 2011 and have two boys–Wesley and James.

Pastor James was born and raised in Northern California in a home with his single mother and two older siblings. He first had an encounter with God while in High school and fully surrendered his life to Christ in 2012. With a heart to preach God’s word, he quit pursuing a career in Physical Therapy and attended William Jessup Bible College. There he received his Bachelor’s Degree in Pastoral Ministry and minored in Bible Theology. Pastor James has been serving and leading in youth ministry for almost 7 years and has a heart to see that generation transformed by the love of God. Pastor James joined the Chicago Tabernacle Staff in June of 2019.

While at William Jessup, Pastor James met his wife Chelsey. Chelsey grew up in a Godly home and established a relationship with the Lord from a young age. Shortly after High School she rededicated her life to Christ and hasn’t looked back. Chelsey is passionate about children and has experience working in education as a teacher. She too graduated from William Jessup with a degree in LiberalStudies concentrating in Multiple Subject Education.

Pastor James and Chelsey hunger to see God impact youth culture in our city. They were married in December of 2016 and now have two boys–Apollos and Ananias.

Pastor Jake Sparlin was born and raised in Chicago. After attending Chicago Tabernacle in Spring 2007, he encountered God through The Story of Love and accepted Jesus Christ as his Lord and Savior. Pastor Jake’s journey into the ministry began soon thereafter.

After earning a bachelor’s degree from Concordia University, Pastor Jake came on staff full-time in early 2008. He continued to serve in a variety of ways for the next several years, including Assistant to Pastor Toledo, Children’s Ministry Director, and Youth Pastor. Now Pastor Jake serves the church as Associate Pastor, and holds an MA in Humanities from the University of Chicago.

We will pray for your request for thirty days at our prayer meetings, as will the Intercession Ministry. Prayer request cards are also available at all of our weekly services or the church office. 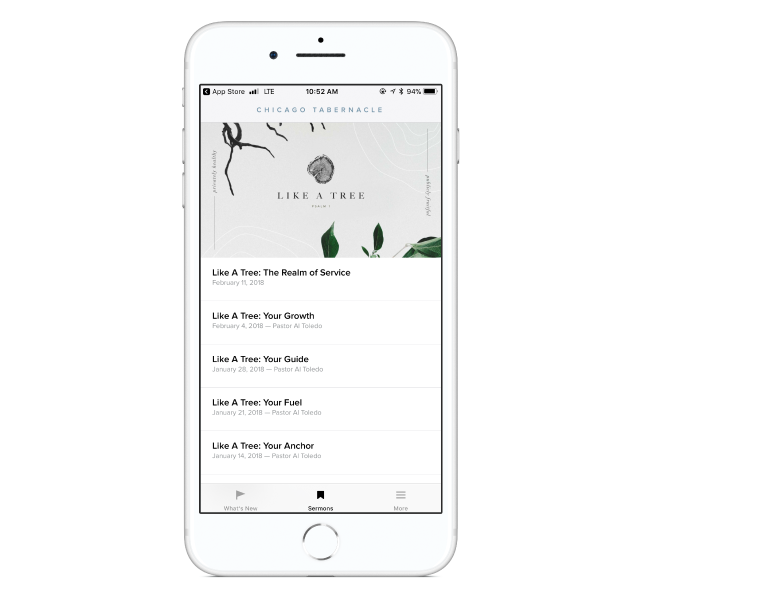